Lawyer Ramon Edison Batacan disclosed that the Rodriguez family will be forced to file a Writ of Kalikasan and administrative cases if the Department of Public Works and Highways (DPWH) pushes through with the construction of the Samal Island-Davao City (SIDC) Connector without complying with all the requirements under the law.

“We will exhaust administrative remedies to the end, first in the hope that DPWH will take a second and closer look. We do not want to stall the implementation of the project,” Batacan said in a text message.

Batacan, a long-time professor of law and dean of the College of Law of Rizal Memorial Colleges (RMC), said if DPWH will not comply the environmental requirements, the Rodriguez family will be constrained to go to court for a Writ, without prejudice to the filing of criminal and administrative cases against all concerned personalities.

Batacan cited the current processing of the Environmental Compliance Certificate (ECC) undertaken by the DPWH, which according to him bypass the mandate of Presidential Proclamation No. 2152 Series of 1981 declaring Samal Island as Mangrove Swamp Forest Reserve and the National Integrated Protected Areas System (NIPAS).

Batacan said given that the entire Samal Island was declared a protected area under the law, the implementation of the SIDC project without clearance from the Protected Area Management Board (PAMB) is a serious criminal offense punishable by imprisonment and fine.

He also said that the Environmental Impact Assessment (EIA) prepared by Arup and presented during the public hearing, is wrongly premised that the entire Samal Island is not under NIPAS. He said the EIA cannot be the basis for the issuance by the Environmental Management Bureau (EMB) of any valid ECC.

“The ECC process should have included securing a clearance from PAMB of Davao del Norte and PAMB of Davao City. This requires a separate public hearing and amendment of the management plan. This mandate is indispensable and must be observed by the DPWH and Arup to say the least to ensure compliance with all environmental laws. I have to say this that the current EMB process undertaken by DPWH and Arup is not enough and without PAMB in the picture the proceedings are null and void,” he said.
Batacan also cited the earlier comprehensive study by Japan International Cooperation Agency (JICA) where the bridge alignment has already been identified.

“At a shorter distance and at a lesser cost,” he said.
The same JICA study was also the basis of the Metro Davao Urban Masterplan undertaken and completed last year by the founder and principal architect of Palafox Associates in partnership with Mindanao Development Authority (MinDA) and several local government units (LGUs).

“While the government spent money on the foregoing study and plan, Arup and ADPWH sadly arbitrarily chose Paradise Island because the land according to them is vacant without really taking into consideration the environmental cost,” he said.

The Rodriguez family, who owns Paradise Island and Beach Resort and the Costa Marina Beach Resort in Samal, has requested DPWH for the re-alignment in view of its adverse environmental impacts. They even offered the land adjacent to the old shipyard, now Bridgeport-a JICA recommended landing site to DPWH as it is the cheapest, shortest, and least environmentally burdensome alignment.

“I’d like to emphasize for fear of being misunderstood that the Rodriguez and Lucas families are not oppose to the implementation of the SIDC project. They are supportive of the project it being part of the Build Build Build program of the Duterte administration. But rather they want to ensure a successful implementation by taking into full consideration the compliance with all the mandatory legal, ecological and environmental requirements of the law. As a show of support, they are even willing to donate a piece of property near the old shipyard in Samal at less cost to the government and this alone is one factor to consider to take a second look at the proposed alignment,” Batacan said.

Batacan also emphasized that it is not just a matter of constructing the bridge but doing it right too.

“Why is there seeming haste here? DPWH is relentless in its PR campaign, left and right together with Arup and both are not giving the correct and bigger picture. Mukhang nagmamadali silang lahat but at whose expense?” he added. 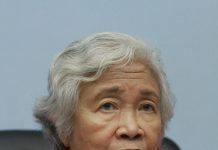 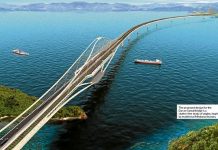