“The problems of plastics have been created in our lifetime.  Half the volume of the plastic ever manufactured was made only in the last 15 years.  The costs of inaction are rising and jointly, we can roll out urgent and concrete actions.” – Agata E. Pawlowska, World Bank Acting Director for Brunei, Malaysia, Thailand and the Philippines

During the 43rd Cabinet meeting in Malacañang last November 6, Presidential Spokesperon Salvador Panelo told the press that President Rodrigo R. Duterte is mulling to ban the use of plastics in the country.

But Panelo never elaborated which kind of plastics are to be banned.  These days, plastics are everywhere.  At home, you can find chairs, tables, and cabinets made of plastics.  In the kitchen, you may discover that plastics have also invaded: cups, plates, forks, and spoons.

Water, soft drinks and sauces now comes in bottles made of plastics.  Other items where plastics are part of them are ball pens, computers, toys, helmets, trophies, cars, motorbikes, vases, etc.

It may not be all types of plastics that will be banned but only those single-use plastics.  In a news dispatch, British Prime Minister Theresa May dubbed these items as one of “the greatest environmental challenges facing the world.”

Environment Secretary Roy Cimatu agrees. “Plastic, particularly those for single-use packaging, has greatly contributed to the degradation of the environment,” he points out.

Associated Press quoted Sherri Mason, chair of the geology and environmental sciences department at the State University of New York at Fredonia, as saying: “We have to confront this material and our use of it, because so much of it is single-use disposable plastic and this is a material that doesn’t go away.  It doesn’t return to the planet the way other materials do.”

Most of these single-use plastics end up in the oceans.  The most prevalent among them are the plastic bags.  “Since they were introduced in the 1970s, plastic bags have infiltrated our lives,” wrote Caroline Williams in New Scientist.

The typical plastic bag that weighs just a few grams and is a few millimeters thick might seem thoroughly innocuous were it not for the sheer volume of global production: 500 billion to one trillion a year.

The United Nations estimates there is now 100 million tons of plastic waste in the oceans, with the vast majority coming from land-based sources.  The implications of that are still not well known, but there is growing and alarming evidence that it has begun to disrupt ecosystems and find its way throughout the good chain, including humans.

Some studies have singled out the Philippines as among the largest sources of discarded plastics that ends up in the ocean.  A 2015 report on plastic pollution by the Ocean Conservancy charity and the McKinsey Centre for Business and Environment ranked the Philippines third – just behind China and Indonesia, two of the world’s most thickly-populated countries.

According to the said report, the Philippines generates 2.7 million tons of plastic waste each year with 20% – the of half a million tons – of that leaks into the open seas.

“There is lack of statistics on the amount of plastic in the Philippine waters,” observes Agata E. Pawlowska, World Bank Acting Director for Brunei, Malaysia, Thailand and the Philippines.  “What is known is that the amount of mismanaged plastic waste is continuously increasing, and that the plastic crisis requires urgent action.”

Plastics “is in our air, our water, our food, our excrement,” said Nina Butler, the chief executive officer of More Recycling, a research and consulting company that works with the plastics industry on recycling.  “It’s very, very pervasive.”

“Plastics freed us from the confines of the natural world, from the material constraints and limited supplies that had long bounded human activity,” Scientific American stated.  “The arrival of these malleable and versatile materials gave producers the ability to create a treasure trove of new products while expanding opportunities for people of modest means to become consumers.”

But these opportunities come with a price.  Every day, Filipinos buy 163 million pieces of sachets, according to the environment group The Global Alliance for Incinerator Alternatives.  That’s almost 60 billion sachets a year!

Sachets are typically made up of laminated film of plastic and aluminum.  Deemed to be difficult to recycle, it often ends up in landfills, or in waterways or oceans.

Here’s a report from the Worldwide Fund for Nature: “As the Philippines is one of the so-called ‘sachet economies,’ most of the debris gathered during clean-ups are plastic, including single-use sachets for shampoo, toothpaste, creams, laundry soap, and even food,” said Dan Ramirez, the organization’s communications and media manager, in an article featured in its website.

Because they are easy to sell – which is why even in remote communities, you see ribbons of sachets hanging from neighborhood stores – large multinational manufacturing companies continue to market them.

Interestingly, the Philippines has a law on solid waste but it is poorly enforced.  Likewise, it doesn’t regulate packaging manufacturing.

There are several laws on banning the use of plastics but they remain pending in Congress.  Senator Francis Pangilinan has filed Senate Bill No. 40, which seeks a ban on the importation, manufacture and use of all single-use plastics.

Senator Cynthia Villar, on the other hand, filed Senate Bill No. 333, which prohibits the issuance of single-use plastics by food establishments, markets and retailers. 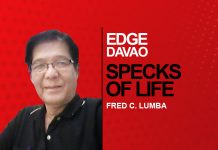 FRED LUMBA: A second wave is not far-fetched

Fred Lumba: For whom thy heart grieves